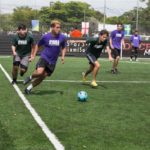 After months of planning, hundreds of hours from volunteers, and generous donations from sponsors, SK Invitational Summer ’16 (sponsored by Keyes Coverage, Lorraine’s Large Family Child Care, and LEASA Industries) was the best we’ve ever had.  The tournament was very successful and everyone had a good time for a good cause.

Over 200 people were at the event that took place at the Soccer5 Fields at Kendall Soccer Park on August 6th.  A total of 16 teams, 136 players, 50 spectators, and 28 volunteers came to show their support.  The full-fledged tournament included a minimum of 3 games, a professional DJ, some snacks and drinks, shade, volunteer hours, and a special Susie’s Knee Jersey that was unique to each team.

When not playing soccer, players and fans had lots of options.  Volleyball, soccer tennis, a juggling contest, snow cones, a raffle with over $200 in prizes, and music by DJ Freckles were among the activities available.

Photographers Duncan Stoner, Paola Roldan, Matthew Osorio, Josue Guandique, Deborah Lee, and Ashley Phang made sure that the event would be well documented, check out some of their photos to be released soon!  Also stay tuned for a video made by Paola Roldan with some extra footage from Josue Guandique.

The Susie’s Knee Team would again like to extend a special thank you to our tournament sponsors, Keyes Coverage, Lorraine’s Large Family Child Care, LEASA Industries, and DJ Freckles.  We would also like to thank our generous donors which included Hitex Marketing, PeiWei, The Car Clinic of Miami, Lan Pan-Asian Café, Sir Speedy, Longhorn Steakhouse, and Villagio’s restaurant.  Make sure to check them out and give them a like and share on Facebook!